The Power of Promo: Tangible Marketing in a Virtual World

You see them everywhere -- branded t-shirts, water bottles, USB drives. People happily clutch bags with logos the size of a watermelon. Call them tchotchkes or swag, or just plain freebies, but whatever you call them, you gotta love them. Promotional items pack a marketing punch, ratcheting up thousands of valuable impressions and loads of goodwill.

What’s their secret? Is it their tendency to be useful and attractive? Does their gifting trigger something hardwired in our brains? Or is it because they’re so darned hard to throw away? What’s made promotional product marketing so effective over the years and which items work the best?

How Promo Came to Be

Although some giveaways can be quite novel, promotional marketing is one of the oldest forms of marketing out there. In 1789, free commemorative pins for George Washington celebrated his victory in the first presidential election. Thirty plus years later, Andrew Jackson was immortalized as “Old Hickory” with representational sticks, poles and brooms.

Then Jasper Meek, a printer from Coshocton, Ohio, hit upon a novel idea. In 1880, he fired up his presses to print burlap book bags featuring a shoe seller’s advertising slogan. These were distributed free to school children. Soon, competitor Henry Beach started printing marble bags, aprons, buggy whips, horse hats and more. Other businesses jumped in with products designed to match their customers’ needs, while also aligning with their marketing messages.

1947 marked a banner year, with marketers spending $124 million in a post-war U.S. that was flush with cash and optimism. Through the 1960s and 70s, the promotional products industry grew as larger businesses realized its potential. And in the 80s, small business got on board with affordable logoed pens and other gifts. By the 1990s, promotional items were often a core component of strategic marketing plans.

Fast forward to today. U.S. marketers spend a whopping $20 billion per year on promotional items, and this number is expected to continue at 3% growth per year based on their effectiveness and low cost of entry. 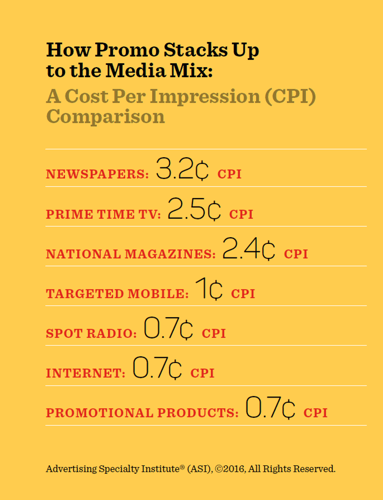 Why are they so popular? Because freebies really work, both for the customer and the advertiser. On average, U.S. consumers own ten promotional products. 91% of us display them in our kitchens, 74% in our offices and 55% in our bedrooms. Not to mention our bodies; we are walking advertisements for the companies that gift us cool t-shirts, hats and outerwear. Fifty-three percent of us use them once per week. They have become an integral part of our everyday lives.

And we respond overwhelmingly well to these gifts. More than 53% of us report feeling more favorably towards advertisers who give us something. That’s powerful stuff. And almost half (48%) want to receive promotional products more often. Once we have them, we’ll hold onto them for an average of over six months, and sometimes up to two years or more. These items also tend to make a lasting impression -- a full 89% of us remember the advertiser from within the last two years. The goodwill just goes on and on.

According to ASI®, one of the premier trade organizations, USB drives top the list as the most powerful influencer of consumer opinion of advertisers, followed by outerwear, drinkware, writing instruments and performance wear. These are all very useful products; 77% of consumers rank usefulness the most important factor in a promotional product. Next, they want products that are attractive and enjoyable (both ranking at 29%). While these numbers are taken from U.S. consumer opinions, they remain consistent when averaged between consumers in many other parts of the world, including Canada, Mexico, London, Paris, Berlin, Rome, Madrid and Sydney.

Two other noteworthy influencers dictate goodwill inside the United States: 42% of consumers feel favorably towards environmentally friendly product-givers and 53% towards made-in-the-USA product-givers. These are great insights to tap for your next giveaway.

Need another good reason to pull out the promo?

People prefer it. They’re the most highly regarded form of media, with consumers under the age of 55 choosing them over TV, radio, print, mobile and internet advertising. In fact, consumers are 2.5 times more likely to have a positive opinion of promotional products versus internet ads. Turns out, freebies really do make people like you.

Prior to receiving a gift, 55% of clients had done business with the giver. This number shot up to 85% after. And giveaways elicit 500% more referrals from satisfied customers than just sending an appeal letter.

Giveaways are extremely cost-effective when compared with other forms of marketing because advertisers can laser target distribution and avoid waste. Need more incentive? One study found that when used as part of a larger media mix, promotional products increase the effectiveness of the entire campaign by an impressive 44%.

You Give, You Get: The Science of Reciprocity

Jerry McLaughlin, president of promotional product giant Branders, attributes their favorable responses to a phenomenon called reciprocity. “If you give something, the recipient is honor bound to give something back,” he says. “In every language and culture, research has found there are really pejorative words for people who get and don’t give back. We humans are hardwired to respond if we get something.”

This action has played out again and again in marketing. When we’re given a gift, we feel obligated to give back, even if we didn’t ask for the favor in the first place. For instance: when the Disabled American Veterans send out an appeal they generally get an 18% response rate. When they tuck in eight cents worth of personalized address labels that number shoots up to 35%. For a small investment they almost double their return. Likewise, 7-Eleven’s Free Slurpee Day actually increased sales by 38% because customers tried the free sample and decided to buy more. Now that’s the power of reciprocity.

Why Can’t We Throw It Away?

Only one person in five will actually throw away an unwanted promotional product. We’re driven by a psychological disposition towards keeping useful items because “who knows -- we may need this in the future!” This was cited in a recent study on recycling. “Things perceived to be less useful… get thrown in the trash,” notes Remi Trudel, Assistant Professor of Marketing at the Boston University Questrom School of Business, who conducted the consumer decision-making study. Further, items that are personalized are likely to be kept, too. “Throwing an “identity-linked” product in the trash is like throwing a piece of yourself in the trash,” says Trudel. So put people’s names on their promos for even more staying power.

Interestingly, we have the opposite inclination when it comes to digital 'stuff.' Rather than holding onto emails and ads, we take pride in clearing our inboxes; it's much easier to just press delete on marketing messages than read through the massive influx. Likewise for ad-blocking software that screens a myriad of messages. These actions are much easier than deciding whether or not to part with a favorite water bottle.

Related: 6 Reasons Why to Use a Promo Expert

Promotional advertising ultimately works so well because it hits our hot buttons, whether it’s our need for useful items, our need to reciprocate, or our need to hold onto things we may need again in the future. Since it costs so little relative to other advertising mediums and is received so favorably, it remains a powerful tool for any strategic marketing plan. And its iterations are as endless as our imagination. Tomorrow, we might be wearing our logos on our Google Glasses—and looking a little more fondly on the gifter.